Posted on December 15, 2012 by VPN Instructions Editor — No Comments ↓

With total filtering (i.e., block) of the OpenVPN protocol in recent weeks in places like China, many users are wondering if this is the end for OpenVPN. What started in late October 2012 with only filterings of certain ports of OpenVPN, was ratcheted up by the end of November 2012 with a seemingly total block of OpenVPN services throughout most of China. This has left users of OpenVPN paid systems at places like Witopia, Astrill, and StrongVPN a loss, frustrated, angry, and despondent.

So if OpenVPN has been so easy to block in a place like China, is this the end for the service? Probably not because other services like Kovurt have quickly filled the void by using OpenVPN and encrypting it in ways that do not readily allow future blocks of OpenVPN user accounts.

Companies like Kovurt use the same types of VPN protocols that Witopia, Astrill, and StrongVPN use, such as PPTP/L2TP/SSL VPN/OpenVPN, but they go a step further and create “digital envelopes” that create more trusted connections between users and the Virtual Private Network world. (You can see more information about VPN instructions and tutorials at VPNinstructions.com). This does slow down the usage for users a little, but that slow pace is balanced by broader privacy and better Internet access for users of services like Kovurt VPN.

According to Wikipedia, OpenVPN is “an open source software application that implements virtual private network (VPN) techniques for creating secure point-to-point or site-to-site connections in routed or bridged configurations and remote access facilities. It uses a custom security protocol that utilizes SSL/TLS for key exchange. It is capable of traversing network address translators (NATs) and firewalls. It was written by James Yonan and is published under the GNU General Public License (GPL).”

So nothing in that definition and use of OpenVPN should change much in the near-future. The only change now is more companies will be utilizing best practices to keep more users private and secure when using VPN services. OpenVPN is far from dead! 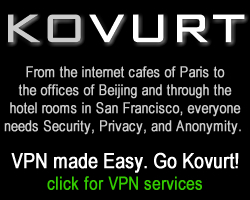